Automatic Stabilisers as a Building Block of the Fiscal Union Architecture

INTERPARLIAMENTARY CONFERENCE ON STABILITY, ECONOMIC COORDINATION AND GOVERNANCE IN THE EUROPEAN UNION

Let me first of all congratulate the Slovak presidency of the Council for organizing this event and choosing such an important topic for the discussion today. 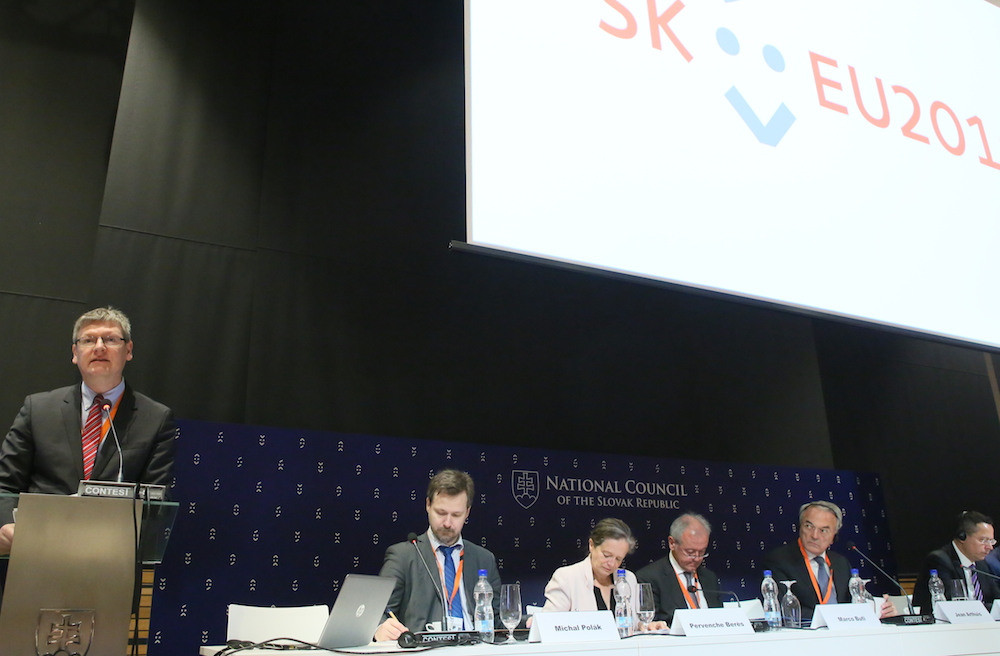 When Europe’s crisis is mentioned today, people most likely associate it with the so-called refugee crisis, and the need to manage Brexit. However, the European Union was already unstable before the 2015 refugee wave arrived and the decision of a major Member State to hold a referendum about continued EU membership.

In June 2015, the Eurozone was diagnosed with serious divergence by the Five Presidents’ Report.

Indeed, the divergence that has developed within the euro area between core and periphery is the main threat to the existence of the single currency and to the stability of the EU as a whole. Hence, there is a need for further strengthening of the EMU architecture, and in particular to strengthen its real economic performance and its social dimension.

This ambition should go beyond securing the short-term survival of the single currency, which was the pattern in the 2011-3 period. Without an improvement in real economic and social outcomes, rising nationalist sentiment will continue to turn against either the single currency, or the EU, or both. The democratic governability in Southern Europe is at stake.

Rebalancing the Eurozone is a key question. Various models of rule-based, though limited mechanism of solidarity have already been explored by think tanks, in order to strengthen people’s and markets’ confidence in the euro, and thus create a better institutional foundation for the recovery of investment.

Hostility around bail-out programs and their conditionality have not created a good atmosphere in which more solidarity could be easily promoted, especially if it involves various forms of fiscal transfers.

However, there is virtually no serious assessment of the functioning of the euro which would see a chance of long life without a fiscal capacity and risk sharing, ideally in some form of automatic stabilizers that can limit the damage from cyclical downturns. Unemployment insurance (or re-insurance) is a welldeveloped option for such a function.

Of course, fiscal capacity is far from being the only issue awaiting debate and answers. There are many other questions on the table.

Should we see the IMF as a permanent participant of EMU stabilization, or we will reach a point soon when the Fund is not needed any longer as a lender or an analyst of debt sustainability? Can the ECB be defended from constant legal challenges when it acts in defense of the integrity of the single currency? Can we find the right balance between external support and national responsibility (and bankruptcy if needed) without the risk of contagion and disintegration? 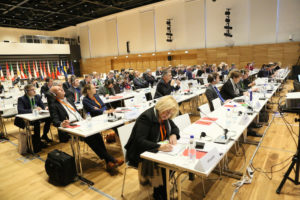 While these and many other questions are raised in connection with EMU deepening, it should not be forgotten that not even the Banking Union has been completed (deposit insurance needs to be delivered to complete the three-pillar system). At the same time, there should be a way to better articulate economic policy in the interest of the euro area as a whole, in order to optimize policy coordination for growth together.

Member states should not be allowed to pursue arbitrary targets (e.g. “black zero”), or accumulate excessive current account surpluses, if those are detrimental to the community as a whole. Establishing a chief economist has been considered for some time, but concrete steps have proven just too difficult, similarly to the external representation of the euro.

Most macroeconomists seem to agree today that the incomplete nature of the EMU makes it unsustainable in its current form, but there can still be a debate about what should be the next step. Automatic stabilisers offer the solution to counter „asymmetric shocks” and resulting imbalances by having a rule-based and conditional mechanism of temporary fiscal transfers.

In discussions on Eurozone fiscal capacity, which are now more frequent than 5-6 years before, experts speak about three possible models of automatic stabilisers. They have different implications in terms of the frequency of transfers, the definition of final beneficiaries, the need for harmonization and governance, as well as the sourcing of the model.

Some economists have explored the possibility of automatic income support for situations of major economic downturns, defined on the basis of the „output gap”. Most likely, such a solution would be in conformity with the current Treaty, but it also has disadvantages. The output gap is a concept too abstract for many people, and when it is calculated, it is often corrected ex post, which risks leading to perverse outcomes. In addition, it entirely lacks a social focus (i.e. it is not certain at all that the beneficiaries of such transfers would be the more vulnerable victims of economic crises).

Reinsurance of national unemployment insurance funds is another possibility. The national capacity of dealing with cyclical unemployment would be supported, but transfers would only be triggered by major crises. Such a scheme would make a stronger and more visible impact at times of crisis, while lacking a 3 role in case of more modest fluctuations. It has to be highlighted that the reinsurance model involves some risk which is related to the possibility to set the trigger too high (in terms of rising unemployment above „standard” levels), and thus making the model less effective than potentially possible.

Finally, a partial pooling of unemployment benefit systems would make an economically more advanced solution, by also defining some common minimum standards accross countries (in terms of minimum replacement ratio and duration). The minimum would not be a maximum, because member states could top up payments from the common pool and also extend coverage from their own resources. But the common pool would already have a significant stabilisation effect and it would represent EU solidarity in countries experiencing temporary hardships do to the limitations of their macroeconomic toolbox in the monetary union.

Had such insurance mechanisms existed in the EMU since the times of 1999, the establishment of the single currency, all member states would have been beneficiaries for a shorter or longer period. Countries experiencing a severe recession would have received fiscal transfers amounting to 0,5-1 per cent of their GDP, helping them to a faster recovery and ending up with less poverty and income inequality for which the EU or the euro are blamed today.

Let me underline that both partial pooling of unemployment benefit schemes and reinsurance of national unemployment funds can deliver three types of stabilization.

First, they would contribute to economic stabilization by shifting demand and purchasing power to countries and regions which otherwise would need to implement fiscal ‘adjustment’ and internal devaluation.

Second, social stabilization would be enacted as well, by directing the flow of funds towards more vulnerable groups, and helping to tame the rise of poverty among the working age population (which has been a major trend in recent years in Europe).

The third type is institutional stabilization. EMU is based on rules but the application of these rules has been the subject of academic as well as political debates. Member states agreed on tightening them but pragmatic considerations often point towards more flexibility, the cases of Spain and Portugal being the latest controversy.

While some experts simply recommend ignoring the rules and giving up on them entirely, it is more likely that a modus vivendi could be found through the creation of stabilization tools that would allow the reconciliation of uniform fiscal rules with the need to maintain national welfare safety nets and social investment capacities.

Obviously, there are pre-conditions for establishing automatic stabilisers, and some degree of labour market harmonization is one such factor. However, the need for this is often exaggerated in current discussions. Since the suggested safety-net for the euro would only need to be connected with shortterm (cyclical) rather than long-term (structural) unemployment, it is a relatively smaller part of labour market organization and statistics that has to be harmonized and not the whole institutional framework.

The degree of harmonisation needed depends on the chosen model, but it would need to be modest in any case, since there is no proposal on the table which would want to cover all unemployment.

Concerns have also been expressed about the future role of social partners, which in various EU countries play a strong role in governing unemployment insurance. Indeed, in any chosen model there would be a need for EU level governance, which could be organized in a tripartite way, giving a real and influential role to the social partners (practically to control the adjustment tools of the mechanism like experience rating and clawbacks).

Conclusions: The EMU and the social agenda

All countries in the EU have the ambition to be welfare states. This means that nation states have a capacity to limit unemployment, poverty and income inequality. This is an ambition born well before the monetary union was created. But the eurozone crisis has severely damaged this capacity in countries of the eurozone periphery, and the problem is linked not simply with the crisis response but the incomplete nature of the EMU.

Alongside economic stabilisation, the key question today is how to strengthen the social dimension of the EMU and counter social divergence. Purely by setting standards without also providing support will not be sufficient. Moving towards an actual fiscal capacity therefore is crucial if we want to see change in reality and not only in principle.

The creation of a minimalist monetary union in the 1990s produced new types of financial and social risks, and the crisis of the EMU brought the EU to massive divergence and a weakening of the national welfare systems. Such dynamics undermine public confidence in both the EU and its single currency.

Today the rise of euroskeptic populism (and Brexit in particular) calls for a thorough rethinking of the functioning of the EU. In my view, a paradigm shift on EMU should be part of this process.

Together with other emergencies, like immigration and the fight against terrorism, the question of the currency has to be discussed in a new light.

In recent years, expert opinions have converged about how to make the single currency sustainable and how to reconcile its functioning with democratic standards and the European social model. The key question, however, is whether there is still sufficient political capital left among mainstream political forces to promote solutions that can accommodate imbalances and counter divergence between the core and periphery within the Eurozone.

The point with unemployment insurance is that it is a possible element of economic and monetary reform, while it forms part of the social dimension as well.

When political capital is limited, the availability of an instrument that could make positive impact on both economic and social sides of the crisis should be appreciated.